FunkRimini: a journey into the boomin’ sound 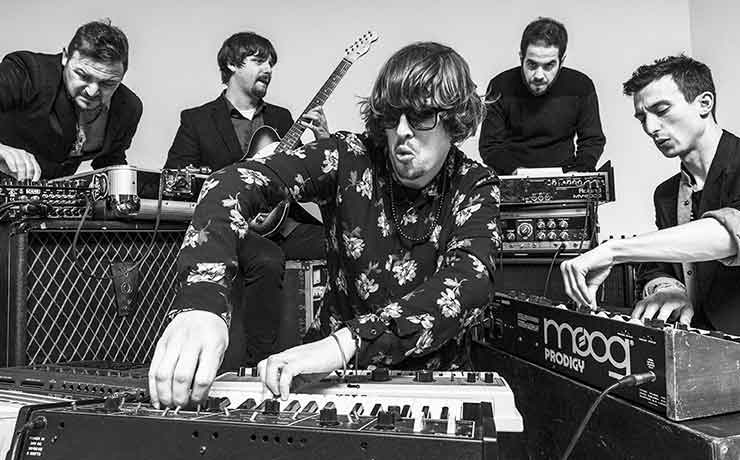 After a first EP published in 2016, which had made them known (and praised) by both public and specialized press, FunkRimini re-emerge from the summer tides of their native Riviera with their debut LP: Flowsane. Thirteen tracks for an abundant hour of music, including future funk, nu-soul and disco-boogie, all rigorously recorded in analogue. After hours and hours of oiling rhythms and the mechanisms of their “animal” approach to music, we have intercepted them to bring you new Wood’d Vibes. A mix of unpublished and unreleased joints, you know? Here, we have it, so press play and fly!

Ciao FunkRimini, welcome…Let’s kick it like: “Hey, who are you?” 🙂
We are a group of five musicians, producers and djs. We like to meet in our studio, make any kind of music with a funky attitude and perform it on stage together. Precisely, FunkRimini are brothers Ricky and Franz Cardelli, Oder, Dj Kambo, Enrico “Ciuk” Giannini.

And how did you start with music?
Everyone of us grew up listening to different musical genres. Thanks to our families and friends we were always surrounded by many good inputs. As kids, it was a natural progression playing an instrument and writing our own stuff.

What are the main influences on your sound?
We are mainly influenced by anything who is made with heart and soul. Any movie, dialogue, record, or book which brings inspiration and creativity to make something new. We love everything that has a story. In our music we love to mix electronic grooves and melodies.

What are you currently listening to, for instance?
We are always looking for the next record, every record is “new” even if it has been released in 1969. In this moment we are listening some classic Italian musicians such as Pino Daniele, Edoardo Bennato and the Italian record made by Chico Buarque “En Italia“. We are also digging deep in the electro breaks from the 80’s. And we always search for old Hip Hop, House and Funk Records.

Where did you draw the main inspiration for this mix?
The idea was to make the mix with mainly home made production, we are always in the studio making beats and new tracks or remixes, some of the them where unreleased, mix and share them was a thing that we where thinking from a long time….

Oh, great! So, what you have prepared for Wood’d?
Somewhat like “a journey into FunkRimini Sound”. From the remix of “Stakeholders (Female Vocals)” or “Hypnorain”, a heavy electro funk made in 2014, to more “disco inspired” re-edits like “Rock the Dub” and our remix of Technoir’s “Cosmixture”. There also two tracks from our new album “Flowsane”, the first is “Move On” and the second one is “Riding Fools” (feat. Capofortuna) in the closing part of the set. We hope you like it!